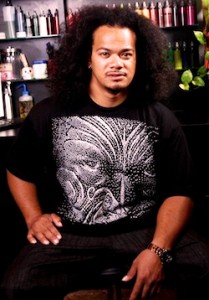 He grew up very poor in a 1 room traditional fale(house) in the Kingdom of Tonga, raised by a medicinal grandmother, in the farm with his grandfather and his young brothers without electricity and bathroom, moved to Fiji, and lived in The Northern Marianas in the South Pacific. His skills and knowledge came from masters in fine art, architecture, anatomy, historian, rock & wood carving, canoe building; navigators, village women handicraft, traditional Tongan music poets and choreographers, engineering, philosophy, and science professors.

Realizing that the art of Tongan tattooing was near extinction, King ‘Afa and his brother, Carl Kalia of Kalia Tattoo in Auckland, New Zealand www.tongantattoo.com. Their goal was to revitalize the art form, not to practice using the traditional tools. But to use traditional authentic symbols to create an art that expresses someone’s story, using the old Pacific Island hieroglyphic writings. King ‘Afa is the first Tongan artist to create a value for Tongan tattoos when Tongans worldwide did not know the value of tattoos. Tongan tattoos were practice in the barter system. His first 4 years of practicing tattoo in the US he has tattooed in countless garages from Hawthorne, Inglewood, all over South Bay California, North California and Utah before settling in Los Angeles. He is the first Pacific Island artist to practice tattoo in Hollywood since working at Zulu Tattoo in 2006.

King ‘Afa primarily sees clients from all over the United States and a wide range of clientele from the South Pacific, Asia, Europe and Latin America, and a growing numbers from Africa and the Caribbean.

He cannot repeat a tattoo, because his brain does not function like an assembly line, however, he can design an art individually to fit each character and experiences. There’s a lof science that King ‘Afa applies to this art form.

“I do not remember people’s tattoos I’ve had done in the past, but I remember people’s stories. I spent thousands of hours with people and all we do is go through pain together and share life experiences to understand each other and humanity” King ‘Afa 2009

Pacific Island tattoo art was created by philosophers, noble elders, and skillful master artists to show identity, ranking or status, for warriors and chiefs to intimidate the enemies, to instill confidence in oneself, or womanhood, to prove readiness for manhood, a reminder of history and ancestors and duty to accomplished, a sign of acceptance by a family, a tribe, a village or community.

“I want people to know that NOT ALL POLYNESIANS TATTOOS are/were just WARRIORS TATTOOS as claimed by most Polynesians today. In an island village community, there must be fishermen, herbal medicine and spiritual healers, cooks, slaves and servants to Kings, Queens and Chiefs, farmers and sea navigators, canoe and weapon builders, storytellers and tattoo artists, musicians, and poets, and traditional house architects and carpenters. There’s an obsession amongst Polynesians today with this “WARRIOR TATTOOS” where they tattoo a shark and not think or attack opportunities like a shark. People tattoo a turtle and they do not have patience like a turtle or create a hard shell like a turtle.
Micronesians had a better-advanced navigation system, and Melanesians are very spiritual with less influence of Christian religions. There very few Polynesians today who are spiritual, because they are religious” King ‘Afa 2013

“There are 100thousands of people all over the world today who are wearing Polynesian art because it looks good. Most people know the surface value of their tattoo as explained by most tattoo artists as ” protection, courage, family etc” but the depth of this art is still not understood by most Polynesian tattoo artists and fans. It is ok if people are getting copies of Dwayne Johnson’s tattoo, they are fans and they are inspired by his life” The Rock’s tattoo is Marquesas(arm-deltoid-scapula) and part Samoan(chest rays) I did not tattoo him but I have practiced Marquesas tattoos more than any tattoo artists in the United States and the Tonga Empire stretched from the Solomon Islands to the Marquesas Islands” King ‘Afa 2016

“It is not the fault of foreigners to not understand Polynesian tattoos, it is the Polynesian artist’s obligation to educate them unless they do not understand the art themselves, now the tattoo is just tattoo, then it becomes just a skin decoration” King ‘Afa